Kampfgruppe Schottland is a Living History Group and we neither condone nor promote Nazi or extremist ideals, views, propaganda or politics. We vet our Members and will not accept or tolerate such behaviours or opinions.

We are about the history - not the politics! 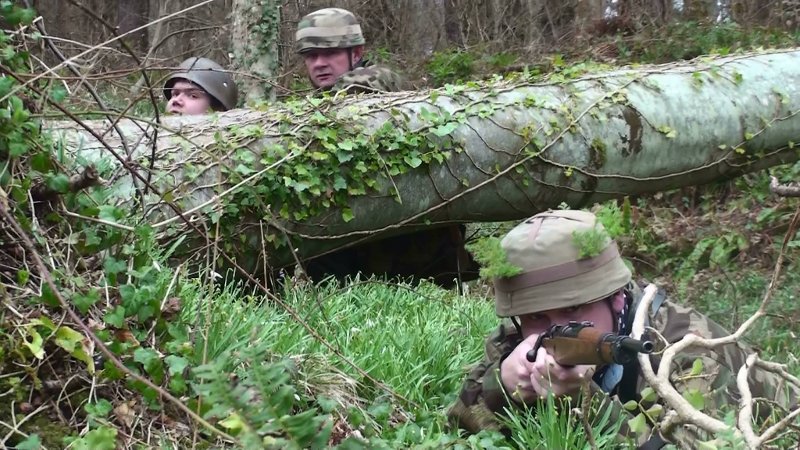 Kampfgruppe Schottland began in November 2009 with the intention of bringing WWII German Living History to Scotland. At the core were a group of seasoned re-enactors who had previously been members of Groups down South, where both Allied and Axis Groups have been established for many years, but who didn't want to travel so far to have fun. We exist to enhance, promote and contribute to the growing WWII Living History community in this country.

Kampfgruppe Schottland aim to educate and entertain the public and to bring to life the wartime experience of the German soldier through our displays, our knowledge, our behaviour and our interaction with the public at events across Scotland and the UK. We also take part in organised battle displays (to the enjoyment of all concerned) and sometimes we win!

We portray two units: Panzer-Grenadier-Lehr Regiment 901 (Motorised Infantry) of the Panzer Lehr Division 130, representing the Wehrmacht, and the Luftland Sturm Regiment 1 of the Fallschirmjager (Paratroops) representing the Luftwaffe. Both units fought throughout the war in various forms but our focus is on the period from D-Day onwards where they engaged against Troops from all Allied Countries following the largest seaborne invasion in history.

Both units are considered elite and served with distinction and honour, earning the grudging praise and approval of the Allied soldiers who faced them.

We are a Scottish based Group and most of our events, meetings and training days will be held in Scotland. We are always open to new members but active membership is encouraged through attendance at events so our location should be noted.

Want to know more? Please feel free to come and talk to us at any of our events. We're a friendly bunch and are happy to chat.

Interested in joining? Please see the Membership Page for instructions.

This unit was a pre war organisation that was formed in order for the German military forces to have a Air landing Regiment that was raised to concentrate on assault of installations where surprise was required.

The regiment was initially involved in the assault on Eben Emmal in Belgium where troops were delivered to the target by both glider and parachute. Further operations in Norway, North Africa, Crete (Kreta) and Russia saw an end to troops being committed by air and these Airborne soldiers found themselves resorting to an Infantry role, often being used to plug gaps in major units, earning them the name of the "Fuhrers fire brigade".

The displays carried out by KGS FJ revolve around the assault and pioneer role of Luftlande Sturm regiment where the various weapons and equipment are displayed and explained. The unit is also able to display the anti tank role and also has a Regimental aid Post and signals detachment.

The Panzer Lehr Division 130 was formed on the 10th Jan 1944 in the Nancy-Verdun area of France, drawing its personnel from experienced, veteran troops. It was formed as an elite demonstration unit – “Lehr” meaning “Teach” – and as a testing unit for new weapons including the Panther and Tiger tanks.

The unit briefly saw service in Hungary in April 1944 where Panzer-Grenadier-Lehr Regiment 901 was integrated. It was one of the only Wermacht or Heer units to be completely motorised with both its Panzergrenadier Regiments - 901 and 902 - being equipped with the latest halftracks and infantry weapons including the MP44 assault rifles and Panzerschrek anti tank weapons.

The unit was returned to France after a complete fitting out with the newest German tank designs and completing its training in May 1944 to await the impending invasion.

Unlike most Wermacht Panzer Grenadiers, the Lehr units mainly wore assault gun wraps instead of the standard German feldblouse which made them stand out amongst their comrades in arms.

Upon the allied invasion of Normandy on 6th June, the Division was part of the armoured reserve force and was held back during the initial phase of the invasion before being sent to defend the town of Caen on the 8th June alongside the 12th SS Hitlerjugend Division.

On June 13, an attack by the British 7th Armoured division found a gap in the Division’s defences and advanced quickly through the lines. The 4th County of London Yeomanry, the British advance unit, threatened the flank of the Division which resulted in the action by the famous tank ace Michael Wittman at the town of Villers Bocage. After having his Tiger stopped in the town, Wittman returned to the Division’s HQ and commandeered armoured consisting of two more Tigers and Panzer IV's to finish off the British advance.

During its time in Normandy, Allied air power accounted for severe losses in men and materiel. By the end of June, the armoured component was severely depleted but despite this, it continued to hold against the British and Commonwealth forces and engaged in heavy fighting near the town of Tilly-sur-Seules.

On the 2nd July, taking what few tanks it had left, Division was ordered to the bocage country around St Lo to provide additional support to the units fighting against the U.S. forces attempting to breakout of their beach-heads.

On 11th July, the Division attacked towards the village of Le Desert deep in the bocage countryside, however, an allied air attack halted their assault. The Division lost 20 tanks in that single attack with the remaining vehicles withdrawing back over the Vire Canal to relative safety.

The Division maintained their hold on St Lo and continued to fight a series of tough defensive battles against numerically superior forces and under relentless air assaults until 19th July when they were forced to retreat.

One week later, on the 25th July, US forces launched “Operation Cobra” which began with a huge aerial bombardment under which the Division were settling in to new defensive positions. They suffered terrible losses and were forced to withdraw towards Alençon on 5th August.

What fighting strength was left of the division was joined into Kampfgruppe Von Hauser which carried on the battles in the bocage until it was ordered to rejoin the rest of Panzer Lehr back towards Fontainbleu and then, finally, escaping back to Germany. The division was almost completely destroyed in the 7 months since its formation during the battles for Normandy and was sent to the Saar region and then Paderborn to be refitted and brought back to division strength.

In early November, Panzer Lehr Division 130 were fully recovered from its mauling in Normandy and was ordered into the line as part of the German operation Wacht Am Rhein. Prior to the planned operation on the 21st November they were ordered to attack the US push on the Saverne Gap but the attack failed taking heavy casualties. The now reduced Lehr division was ordered back out of the line with their morale badly shaken.

Once again the Lehr Division was sent for refit before being held as a reserve for the operation. It was still badly under strength with few tanks and armoured units being operational but they eventually began operations on 16th December following the 26th Volksgrenadier Division, a badly trained and underequipped unit which lead the way.

Their advance soon became stalled and the situation began to deteriorate and Panzer-Grenadier-Lehr Regiment 901 soon became involved in heavy fighting around the town of Wiltz.

After delays, 901 eventually made its way to the besieged town of Bastogne and entered the fray. With its mobility and through repeated attacks on the town they began to close the Bastogne pocket further and, despite heavy losses against the besieged American troops, gained some notable successes including the capture of a large American convoy desperately trying to deliver supplies to the surrounded troops. Despite the gains made by the Regiment they were eventually stopped by superior US forces at the town of St. Hubert and were pushed to the South of Bastogne.

They continued to fight to secure the town but losses became too great and they were pulled out, becoming joined to the 116th Windhund and 2nd Panzer Divisions which were readying themselves for an assault on the Meuse and Dinat.

The Panzer Lehr Devision 130 began to ready itself for a push on the Meuse through the towns of Rochefort, St Hubert and Dinant but a days delay organising the forces allowed the defending US forces to strengthen. Due to its losses at Bastogne, 901 was held in reserve and her sister Regiment – 902 - led the attack on Rochefort with the Divisions commander, the famous LtGeneral Fritz Bayerlein, commanding the attack with the words “Also los, Augen zu, und hinein!" - "OK, let's go! Shut your eyes and go in!"

On the 23rd December, 902 made repeated attacks on the town taking heavy casualties before the stiff US resistance eventually withdrew leaving the town and road to Dinant clear. On Christmas day they found themselves up against the 2nd US Armoured division on the flat plains before the Meuse. Unfortunately, the cloud cover had also disappeared so its superior tanks could now not take advantage of this excellent tank fighting country due to repeated and heavy Allied air attacks which reduced the division further.

On the 26th December the division now attempted to rescue the 2nd Panzer Division which had become surrounded at the town of Celles but once again Allied air power overwhelmed the beleaguered Division who were once again pulled back in a final attempt to take Bastogne now that it had become apparent that “Wacht Am Rhein” had failed.

The unit was pulled back to form a defensive perimeter around Bastogne but they were placed in the direct path of the US 11th Armoured Division who smashed through their forward posts with little effort. The Division fought to close the gap created but overwhelming firepower and constant air attack almost completely annihilated the Division who eventually fled back towards Germany once again a shadow of their former self.

Completely battered the remnants of the Panzer Lehr Division 130 were sent to Holland in an attempt to refit but with the failure of “Wacht Am Rhein” Germany was no longer in a position to supply its divisions properly. After a very limited refit using only the supplies available locally they began operations against the British 21st Army Group.

As with every other campaign, the Division fought bravely and with honour earning the respect of the troops they faced but air superiority and overwhelming ground forces took a heavy toll on the division. With heavy losses, with very few veteran troops left, they were pulled back and ordered to take back the bridge at Remagen.

The bridge had been captured and was held by the US 9th Armoured and it represented the only escape route back to the heart of Germany. They fought desperately to win it back suffering further heavy losses but they drew a heavy price in men and armour from the Allies who stubbornly held on.

Eventually, the Division had suffered so many casualties that it existed barely in name. It was a shadow of it’s former strength but continued to fight in a stubborn retreat across Germany until it was surrounded in the Ruhr Pocket and, in April 1945, what was left surrendered to U.S. Forces.

During its one year of formation it is estimated the Panzer Lehr Division 130 lost over 10,000 men killed, wounded or missing and some 1,000 armoured fighting vehicles.

The division had quickly gained a reputation as Elite and they were respected – on both sides - for their skill and tenacity in attack and in defence. They were well lead, well equipped and were arguably the finest fighting force available to the Germans in 1944.

The Division has never been accused of any atrocities during the war. They are known and respected by Allied Veterans who faced them for their conduct, skill, bravery and honour.